It certainly feels that way at times. Sometimes I really wish I could have started transition when I was 22. Instead of coming out when I first began to bloom I let myself be crushed by social pressures for another thirteen years. Nearly all of that time I was hopelessly bipolar and was hospitalized several times. I still am bipolar, of course. But things have been much more approachable and manageable since I started transitioning socially and ESPECIALLY since I began HRT. Gender Dysphoria nearly crushed Me but getting on Estradiol and Spiro literally saved my life.

I’m still struggling with my employment. It hasn’t been a great season on the beach and my RA was absolutely freaking out(since i had to go off meds for about six weeks!)after I had pneumonia over spring break time. Today is my second Orencia infusion and I’m happy to say things are slowly but surely leveling off and calming down with my joints since I began. No reactions to the infusion and it only takes about half an hour.

As much as I love working on the beach, I’m thinking it may be time to move on. It’s just getting too hard with my joint issues and it’s just not really suiting me well these days. Which actually makes me upset because I love the people I work with and for. But I can’t deny that I’m slowing down from the RA fatigue as well as losing strength from HRT and I’m simply reaching a stage where I need to dial it down a bit and find something a little less erratic.

I don’t mean to sound all melodramatic, really. Things are not THAT bad. But I’m in the weeds pretty hard nonetheless. I’m just not making enough money to pay for all my regular obligations and not one but now two therapists who don’t take my insurance. That in itself is about an extra 175 a month. This is fine when the beach is going well but that’s not the case lately.

I’ve got my sights on something entry level at the local hospital. I think it’s achievable since my employment history is a bit more solid these days and I have a medical card to justify a positive cannabinoids test which for years was the only thing really stopping me. So putting together a resume and applying for a few positions is DEFINITELY on my agenda today.

Speaking of the medical card for a moment:

Saw my awesome Cannabis Physician yesterday morning and had a splendid visit. He is an Internist who doubles as a Cannabis Clinician and a Family Doctor, absolutely wonderful fellow. He hadn’t seen me in six months and was like ‘Wow, you’re getting some amazing results from the HRT!’. Anyhow, he added my recommendation for smokeable flower so I’m happy about that for sure. I just wish insurance would help with some of this stuff. On a side note, both the Doctor and the nice Lady who brings my mail told me I looked gorgeous around 9am yesterday so I was pretty much riding euphorically high on that little cloud all day.

HRT is seriously the best thing I’ve ever done for myself and one of the main reasons I refuse to confirm the question posed by the title of this post. I am not failing. But my blooming process has been extremely long and painstaking. I’m honestly barely even halfway there. The HRT has shown me that I can be comfortable within my own head without needing my mind to be completely drugged into submission with stuff like zyprexa or thorazine. I’m honestly amazed my twenties didn’t kill me. I think of all the pain, anguish, hopelessness, and crushing despair during those years and it truly helps me grasp and appreciate how much better my life is these days.

Hormones take a long time to do their thing but the immediate relief to my wounded psyche from the first few days was absolutely ASTOUNDING to me. There are the obvious effects to be expected like of course breast development (at almost six months in I’m around a B cup) and softening of facial features. Some of the most pleasing personal things I’ve noticed so far include a DRASTIC reduction in my body hair. I was never a very hairy person and I always hated the little bit I got. I’m still pretty dense and bushy in the pubic region as well as the armpits but my chest hair and the hair on my legs have pretty much completely disappeared. I used to get terrible dysphoria from shaving my chest and whatnot so it makes me so happy that I no longer need to. I haven’t shaved my legs in three weeks and the stubs are so much more wispy and less coarse. Even at three weeks of letting it go my legs still look mostly smooth. The only area this hasn’t helped with is facial hair. Still going to have to get that zapped eventually.

The other funny thing is that I’m sort of shrinking. No, not THAT(AT LEAST NOT YET LOL), but height is what I mean. I used to be one inch taller than my Man at Six feet. Now we’re dead even and he’s looking awfully smug 😏

One thing HRT doesn’t do is help one with vocal troubles. I’m hoping to eventually look in to getting a vocal feminization surgery which is where a small amount of the voice tissues are shaved to alter the pitch. My boyfriend offered to pay after he heard that wouldn’t be able to speak for a month after the fact. He’s a funny Man but I don’t think he’s joking this time😄

I was set to do a voice class soon but it got canceled. I was pretty upset about that because vocal dysphoria hits me pretty darn hard sometimes. I look a lot more feminine than I did early on but I feel like my voice really throws people off.

I see my Endocrinologist in a few weeks at which point I am hoping to secure letters for legal name/gender marker change/surgery, get on progesterone to further breast development and aside from that, just trying to stay on target😎

Not languishing, just fighting like hell the way I do.

More as it develops💋 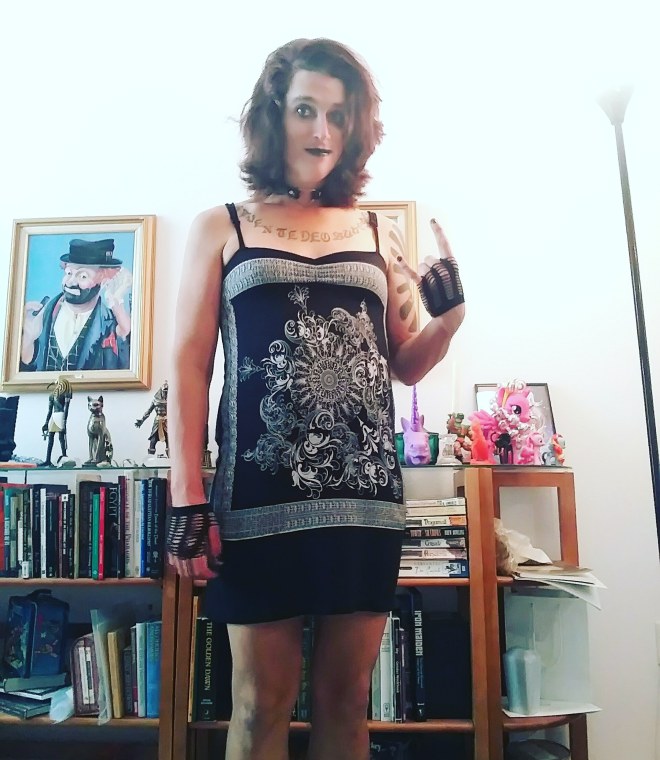