Hey y’all. This post finds me in a pretty rough state. That said I figured a blog post would probably be good for me as well as spare my friends a bit of my shitposting histrionics. So where does one begin? Well, most likely from being in a weakened state from my immunosuppression drugs… One of, but not the only scary sides of treating autoimmune disease. I am currently dealing with super happy fun time in the form of pneumonia. I am off work for the week and sitting around the house alternating between Theraflu and cannabis oil and various forms of tea. The first two days were mostly drinking soup and writhing in misery. As you might imagine, neither my bipolar disorder or my rheumatoid arthritis are on break for any of this. I had already quit my Kevzara injections. The last shot was due a bit over two weeks ago and I was already flaring like hell after the previous dose so I decided another shot was pointless. It’s actually really fortunate. If I did that last injection I’m certain the pneumonia I found out about a few days ago would have been way more intense.

As it stands, I thought I had a cold but when it got worse I walked to a clinic by my house and they confirmed what I was pretty sure of. I’m on a Z pack and albuterol. Also using mucinex and a few other things like cough drops and ginger turmeric tea to help with inflammation. The shit thing right now is that I’m on nothing for RA because I’m fighting an infection. My Rheumatologist wants to start me on Orencia IV infusions but obviously I have to get well first. So all I have right now is cannabis tincture, but I AM SO GRATEFUL FOR IT ❤

Infusions are a bit frightening to Me. It’s kinda the next level of treatment and… It tells me even without the blood work to verify(which I’ll explain in a moment) that my disease process is advancing. I’m what they refer to as Seronegative. Meaning my Rheumatoid Factor and C-reactive Protein generally look normal(these are the usual markers doctors go by for diagnosis, but NOT ALWAYS). In spite of that my symptoms are observable to the eye and I HAVE had one blood test that actually revealed something. The only one that really ever has- the Vectra DA(disease activity) panel. It measures about a dozen markers and gives you a numerical score which is worse as the number rises. The first year I was diagnosed my score was a relatively low 13. The next year it more than doubled to a 27. still not quite high, but concerning. After that I have no idea, and the reason is that I haven’t had this test in a long time. Because apparently with patients on Kevzara(sarilumab) like me, the results become completely distorted so we couldn’t use it. I’m off it now but I don’t know how long it’ll be until I can Vectra again. I’ll have to ask the Dr. next visit.

Anyhow, the major issue right now is my lungs being all gacked up. I’m steadily noticing the pressure in my head and chest easing off but I’m by no means clear yet. I’m just happy to have my appetite back as I’ve already lost nearly twenty pounds. My Man has been absolutely amazing lately and has been taking the BEST care of Me. I’ve been an emotional wreck lately because my burning fear of my RA becoming disabling seems a lot more plausible these days. Also, it’s the kind of thing where is the disease doesn’t kill me the treatment still could. I sob to myself sometimes when people tell me they think I’m brave or inspiring or whatever. It’s not that I don’t appreciate it or them, really. I just have a really hard time seeing it in myself. Sure, I’m a fighter. I’m not disputing that. But I am far from brave. What I am most of the time is absolutely terrified and freaked out. Sometimes I feel like all my confidence and determination is but a theatrical ruse to please my ego. I’m sorry if this isn’t what anyone wants to hear but….. I’m not giving up. I’m just being real about how afraid I am.

Things are in many ways looking up, in spite of the current happenings. I’ll be doing my legal name change hopefully by my birthday. Also, Iron Maiden comes to Florida on said date. How perfect is that? I have an amazing support network of family and friends. I finally have a medical cannabis card and don’t have to be treated like a criminal anymore. Things could certainly be worse, methinks. It’s just been a series of heavy weeks and I am unbelievably worn out. On a bright note: I finally told off a long time ‘friend’ who had been trying to convince me to stop taking all my meds. Good riddance!

And in my head I hear the burned out voice of Layne Staley weakly breathe the words….. 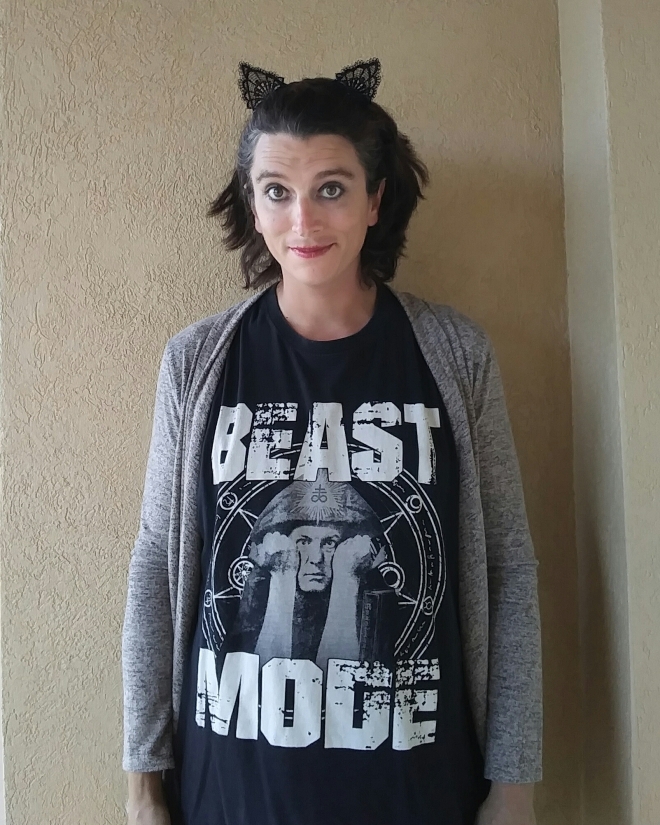